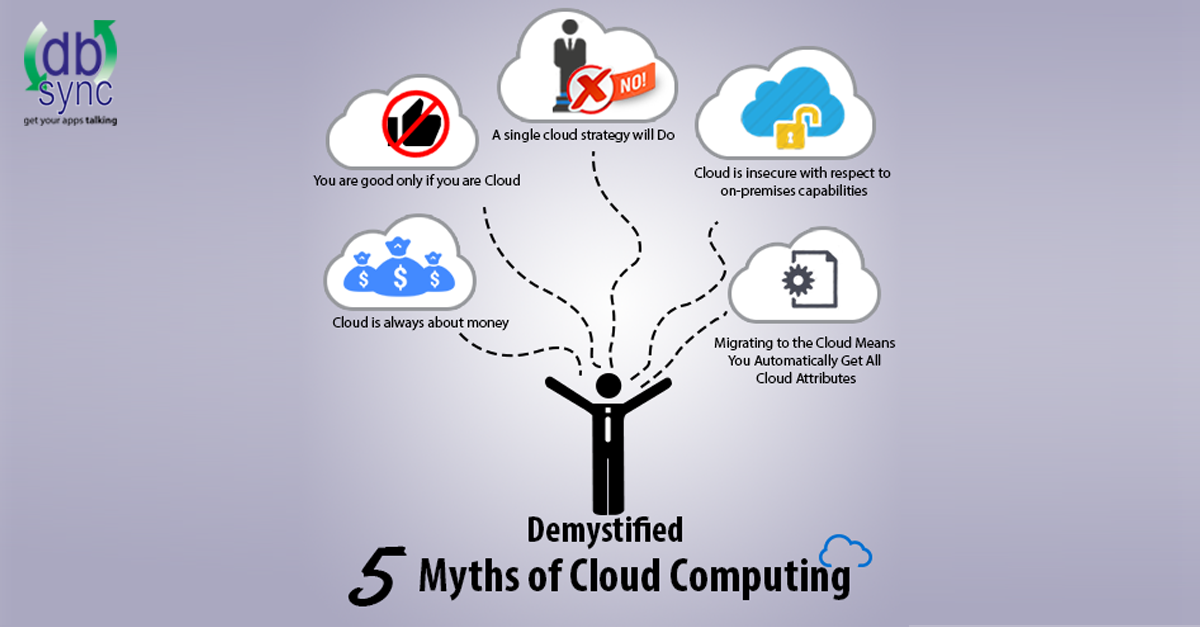 While cloud computing made big leaps in the past few years emerging as a conventional business tool, at the same time, several myths came forward which haven’t been deflated yet. Though these myths may not be very harmful, yet they affect our methods of approaching solutions.

Below is a list of some of the most dangerous myths that can be misleading:

1. Cloud Is Always About Money:

Many believe that the cloud always saves money and that it is the most important reason why companies are migrating to the cloud. However, the fact is that money isn’t the most important factor, but agility. Though the prices for IaaS (Infrastructure as a Service) are dropping, not every cloud service’s price is reducing. (For ex. SaaS) Hence, saving money is just a factor and should not be taken as granted. It varies from organization to organization.

Money through the cloud can be saved only after doing an exhaustive analysis of the situation where the total cost of ownership can be utilized. One must look beyond the cost issue and also be certain about the significance of the shift from capex (capital expenditure) to opex (operational expenditure)

2. You are good only if you are cloud:

People are unnecessarily fed with the hype that if something is good, it has to be the cloud. If it’s not cloud, it cannot be good. This is a wrong notion. Many organizations intentionally or unintentionally have been “cloud washing” (a general tendency to call things cloud which actually isn’t). Some believe that today, connecting everything with cloud makes them look more important, sophisticated and at par with the current IT trends. Some organizations have also started calling themselves cloud-based in order to get more funding and popularity. But the fact is that all these practices and beliefs are wrong!

You do not have to fake them as cloud, but call things as the way they are. There are several capabilities in the industry which aren’t cloud. For example. Automation, virtualization, etc. Let them be the way they are. This will help you avoid expectations which have been misplaced.

3.  A single Cloud Strategy will do:

Cloud computing is not just “one thing” and based on this reality, the cloud strategy should be formed. There are several cloud services spanning on multiple levels, models, scopes, and applications.

Before building the cloud strategy, it’s important to derive and align the business goals with its potential benefits.  According to these benefits, the services should be decided which may involve multiple cloud services. Considering these services, a single cloud strategy can be formed based on a decision framework that allows the functioning of multiple services.

4. Cloud is insecure when compared to on-premise capabilities:

Cloud computing is believed as less secure. But the fact till date is that many security breaches start from the on-premise data center environments and not on the public cloud. This is because cloud providers make significant investments in security technology.

But with this explanation, you cannot assume that cloud is completely secure either.

Security does not depend on one factor and it is very important to identify where the security responsibility does actually lie. It’s better to stay cautioned from one’s end in order to avoid a security breach. This is possible when an organization assesses its actual capabilities it’s potential cloud service provider’s capabilities.

5.  Migrating to the Cloud Means You Automatically Get All Cloud Attributes:

If you migrate to the cloud, that’s not enough to have all the attributes and characteristics of clouds as they aren’t transitive. Applications hosted on the cloud are different from cloud services. You need to understand the difference. If an application is hosted in the cloud, it may not necessarily be a cloud service.